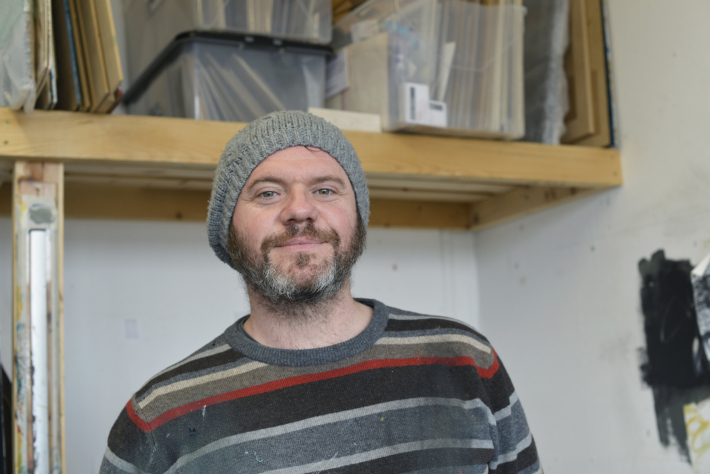 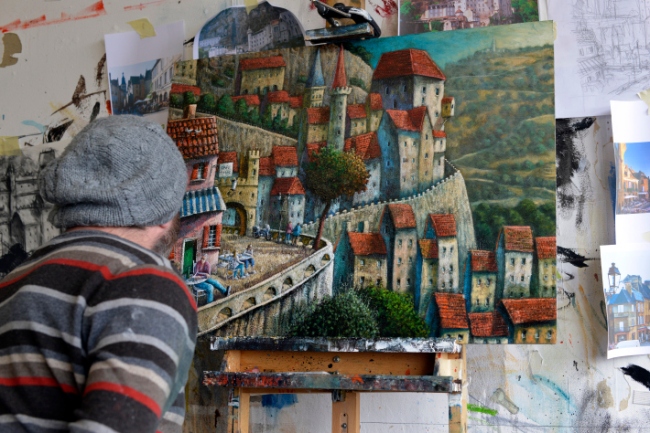 Adrian Sykes is one of our resident fine artists, who specialises in painting landscapes and buildings. Based in Stokes Croft, he joined Jamaica Street Artists a year and a half ago, after leaving his previous studio.

Adrian moved to Bristol ten years ago, originally to pursue music but found that Bristol’s strong art scene brought him back to art. ‘It rubs off on you: now I do both.’ The mix of different artistic practices at the Studios keeps life interesting and varied and allows for each artist to interact with other likeminded people whilst also being offered different perspectives on the world. ‘The selection process for studio holders is quite specific, so if there are loads of fine artists on one floor they won’t take another. This is just to mix it up really, and that helps to keep the place dynamic.’

Adrian has enjoyed being a part of the artists’ co-operative on Jamaica Street, and with a shortage of suitable studio space in the South West, it’s easy to see why. ‘It’s a very good studio to be part of, it’s very professional. There’s people doing really well here, they’re good at what they do; that creates an environment that’s very motivating. It can be quite isolated being an artist, once you’ve closed your door that’s it really – you’ve just got to get on with it, so to be around other people is a massive advantage. I worked at home for about a year before my previous studio and went slowly mad trying to get work together. It’s hard doing it on your own; you need other people around you especially when you’re doing creative stuff.’

For Adrian, staying motivated is about being disciplined, and just as with most careers, some days are just better than others. Adrian finds that getting advice and feedback from the other artists in the building encourages him to keep going. ‘Having exhibitions and selling work is a validation of what you do. It encourages you to carry on; someone’s bought it, someone likes it. The other artists in the building have a positive effect too, they give you feedback.’ ‘We’re all at a stage where we’re slightly reassessing what we do; you can get branded as a working artist. Galleries can get a bit thrown if you start experimenting too much and having different approaches. Sometimes they’re surprised by that because they can have a fixed idea of what you do.’ ‘You’re the sole driver to the whole thing, you have to keep motivated and inspired and interested in what you’re doing otherwise it does become a bit of a production line and you just churn stuff out.’

There is something about the Studio building which feels like it would be easy to stay inspired. The former carriage works stands three floors high with incredible views of Bristol. The huge windows allow its inhabitants to peer out over the city and have a reflective moment in between working. There was definitely never a building more suited to being a studio, and its residents certainly feel the same. ‘It keeps me inspired, particularly as I do a lot of buildings and aerial views of cityscapes and landscapes. It’s absolutely perfect. There are a lot of things to look at up here, I love it. It definitely helps having that perspective on the city.’ Adrian would like to explore more European places, ‘I like the architecture in certain parts of Europe, places like Italy and the South of France. I like that sort of small, medieval type town that could be anywhere. I find them really inspiring.’

We asked Adrian what he was planning for the upcoming Open Studios in June. ‘Everybody turns their studio into a gallery space, a lot of white-washing of walls. We put paintings up, and turn it into a gallery. I’ve got lots of prints of work that I’ll show this year.’ He is soon off to Switzerland to be the resident artist at a festival in Bern and hopes that visiting there will give him a new direction in his work. Adrian is drawn to romantic views of small European towns, which is reflected in some of his more recent work. When capturing his impression of a place, he uses photographs as a starting point and then lets his imagination make up the rest. ‘I get an idea from the photographs and then create some sketches based on that and get a composition together. A lot of my stuff has been a montage of an area, so I’ve moved buildings around and not been too restricted by the geography of a place. If I feel the need to constantly look at a photograph then something’s wrong with the piece, it’s not coming out of my imagination.’ 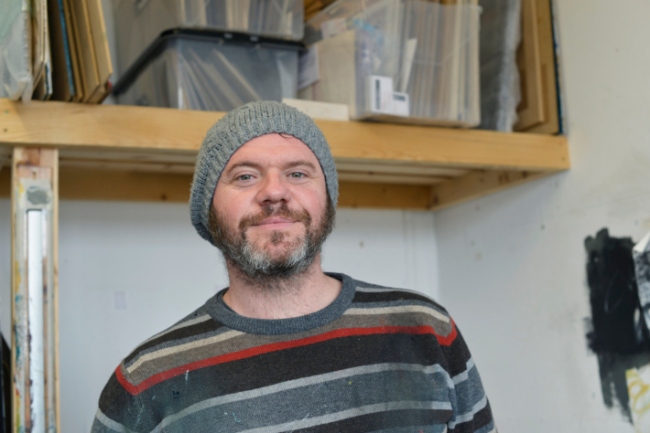